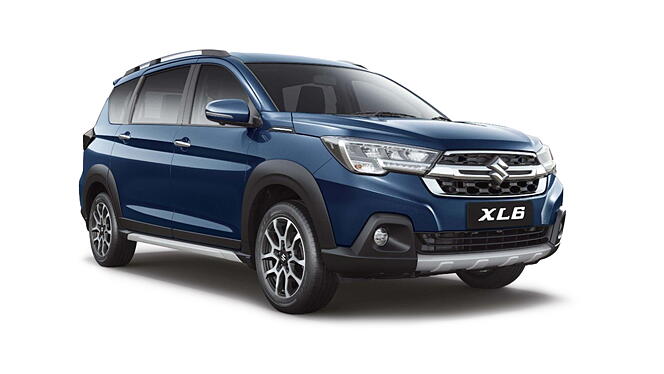 Mechanically, the Maruti Suzuki XL6 is powered by a next-gen K-series 1.5L Dual Jet, Dual VVT gasoline engine with progressive smart hybrid technology. This engine produces 102bhp at 6,000rpm and 136.8Nm of torque at 4,400rpm. The MPV is available in five-speed manual and a new six-speed automatic transmission option with paddle shifters. In terms of fuel efficiency, the manual transmission returns 20.97kmpl, while the automatic version returns 20.27kmpl.

As part of the fresh update, the XL6 gets a new bold front grille with ‘X-bar’ element which is complemented by Quad chamber LED reflector headlamps along with LED DRLs. The vehicle rides on a set of 16-inch machine-finished two-tone alloy wheels. The rear section is highlighted by 3D LED tail lamps with light guide and smoke grey lens. Additionally, the vehicle also gets a new back door garnish with chrome insert, back door spoiler, and a shark fin antenna.

The XL6 gets premium leather perforated seat upholstery along with captain seats in the second row and reclining seats in the third row. The vehicle also gets roof-mounted AC for rear passengers with multiple adjustable air vents and three-stage speed control. Additionally, it also gets air-cooled can holders, front row armrest with utility box, smart phone storage, bottle holders in each row and an option of a power socket in each row.

The Maruti Suzuki XL6 competes against the likes of Kia Carens and the Mahindra Marazzo.

While the Maruti Suzuki XL6 always had the looks and upmarket interiors, it now gets a revised list of contemporary features to take the fight to its rivals. Also helping it achieve that, are the new engine and new six-speed automatic transmission.

Far and away, with the update, the new Maruti Suzuki XL6 continues to fit its purpose of being a practical family mover with a hint of premium feel to it.

Over the past few years, the Maruti Suzuki XL6 has been a default choice in the entry-level premium MPV space, but with the arrival of a new competition in the form of Kia Carens, an update for the XL6 has turned up. It’s not a generation change but in the face of new-found competition, the 2022 Maruti Suzuki XL6 brings in a reworked engine, an all-new gearbox, added features, new-age connectivity and some nips and tucks both inside and out. With this update, the new XL6 continues to fit its purpose of being a practical family mover with a hint of premium feel to it.

With the update, the new XL6’s K15 engine now gets a C in its name (replacing B). And with this C comes two injectors per cylinder and dual variable valve timing, while Maruti’s mild-hybrid with start-stop function carries on. It can be had with a five-speed manual, and the old four-speed automatic is replaced by an all-new six-speed torque converter which is imported from Suzuki internationally. This new gearbox adds 15kg over the older four-speed and also comes with paddle shifters – a first for Nexa offering. Power output is 102bhp and 136Nm for both manual and automatic.

Similar to the K12C, changes to the K15C are barely noticeable in the real world. This four-cylinder is still refined and remains silent and vibration-free at idling. On the move, there’s a good amount of push from the engine lower in the rev range. Although there’s little to no initial delay, it gets more responsive past 2000rpm. Push it beyond that and the engine gets spritely with good throttle response, but also noisier close to 4500-5000rpm. In the city, the five-speed manual gearbox’s light and progressive clutch action and short gear throw make it a breeze to drive. Whereas, out on the highway, triple-digit cruising speed can be maintained with the engine churning away between 2500-3000rpm.

Compared to the older four-speed, the newer six-speed torque converter is much improved – be it for everyday drivability or fuel efficiency (claimed fuel efficiency of 20.27kmpl). And the provision of manual mode with paddle shifters further helps when there’s a need for quick downshifting for sudden overtakes, or just for some driving engagement.

Getting off the line, the transmission likes to shift early, before 1800rpm and the gearshifts are seamless and jerk-free. The first three gears are short (for acceleration) while the rest of the gears have a taller ratio (for fuel efficiency). But on the flip side, this powertrain doesn’t like to be hurried. The speed mounts sedately while the transmission only lets the revs to climb when the throttle is pinned to the floor. Driving between 50-80kmph the engine would be comfortably sitting at 1,500rpm.

Moreover, in kickdown, the gearbox doesn’t judder but you can feel it working down the cogs. And when there’s a need for quick overtakes it’s better to use the paddle shifters to downshift rather than waiting for the gearbox to do it for you. As for the paddle shifters themselves, the action is nice and the corresponding response from the drivetrain is also quick and tractable for everyday drivability.

To accommodate the newer engine and the added weight, there are some tweaks done to the XL6’s suspension setup. The ride quality at slow speeds is surprisingly well absorbent. It plods nicely over broken patches, without unsettling the passengers. Even over speed-breakers, there’s not much vertical movement. Take it up on the highway and the ride remains flat and even those occasional irregularities are absorbed without a fuss. It also feels planted while doing triple-digit speed. And with the upsized 16-inch wheels, the ride height has gone up by a few millimetres.

This update has also added a better returnability to the steering wheel which goes more than three and quarter turns lock-to-lock. The XL6's steering at low speed is light but it requires more effort to operate than something like the Carens' steering. Still, it's quite predictable and linear past the dead centre and the weight is maintained even at higher speeds. The brakes on the XL6 also proved to be quite satisfactory for both everyday use and highway excursions.

Changes to the inside are limited to a new touchscreen interface and the welcome addition of ventilated seats. What the XL6 still misses out on are a few vital features like a wireless charger and sunroof, and although you get one in the new-gen Baleno, the HUD over here is given a miss. So, the rest of the cabin remains unchanged and still doesn’t look dated from when it was introduced a few years back. There is a good concoction of materials and textures in the all-black cabin and the quality of material all around should stand the test of time easily.

While the ventilated seats are a welcome addition to the updated XL6, we love the overall shape and comfort of the seats. They are large and offer support in all the right places. And the captain seats are comfortable with good head and knee space. This is where most of the owners would love to spend their time.

Lastly, the third-row seats have decent head and knee room, and the glass area to look outside is large enough as well. There’s also a provision of cup holders and a three-point seatbelt for both passengers and a 12Volt socket for third-row passengers. And if there is more luggage to be moved around, the third row can fold flat expanding the boot space from 209litre to 550litre.

There’s an addition of Alpha Plus trim to the new XL6. This update adds newer paint options apart from dual-tone exteriors, a new machine-cut alloy design and smoked LED tail lamps in the clear lens, all of which look nice. On the inside, the seven-inch Smartplay Pro interface for touchscreen is modern, especially in an all-black theme and is easy to navigate with good touch response. It also comes with a Suzuki Connect connectivity app and voice command adding a modern feel to the ownership experience.

Moreover, introducing the 360-degree camera is a move in the right direction. The surround-view from the camera is clear if not high definition and it is very handy to use. Lest we forget, TPMS and reach adjustment for the steering are also part of the update. On the safety front, there are just four airbags on offer and we wish it was six at this point.

Prices for the new and updated XL6 have gone up by a couple of lakh rupees. This top-spec Alpha Plus trim we have driven is Rs 14.39 lakh (ex-showroom). Most of this price hike is owing to the changes undergone by the powertrain. Even the six-speed AT is a CKD. To justify the price hike, Maruti has provided some newer features to the MPV, but we’d have preferred additional sheet metal tweaks and changes inside the cabin to substantiate this update as a facelift.

It could have also done with some more equipment like airbags for rear passengers, wireless charger, drive modes and sunroof, since the direct rival, the Kia Carens, has all of it. Nonetheless, the updated Maruti Suzuki XL6 ticks the right boxes of being a practical MPV which is comfortable to live with. The addition of a new six-speed automatic has rectified the shortcomings of the older unit and the updated motor should also prove to be more frugal in these times of rising fuel prices.

Download Maruti Suzuki XL6 brochure in just one click to view specs and features of all the variants of XL6.
Check Other Car’s Brochure
Download Brochure

By Bilal Ahmed Firfiray26 days ago

Far and away, with the update, the new Maruti Suzuki XL6 continues to fit its purpose of being a practical family mover with a hint of premium feel to it.
Read More

Maruti Suzuki finalises location for a new plant in Haryana

By CarWale Team7 days ago

2022 Maruti Suzuki XL6 launched: What else can you buy?

By Nikhil Puthran21 days ago

For a similar price range, you can also opt from the following options.
Read More

By Bilal Ahmed Firfiray22 days ago

Let us take a closer look at the updated 2022 Maruti Suzuki XL6 through pictures.
Read More

By Nikhil Puthran27 days ago

By Nikhil Puthran28 days ago

Read below to learn more about the key differences between these siblings.
Read More

Q: What is the on road price of Maruti Suzuki XL6?

The on-road price of XL6 in Delhi starts at ‎₹ 13.1 Lakh and goes upto ‎₹ 16.8 Lakh. The on road price is made up of ex-showroom price, RTO registration, road tax and insurance amount.
Read More

Q: How much will be the EMI or down payment for Maruti Suzuki XL6?

Q: What is price of Maruti Suzuki XL6 top model?

Q: What is the mileage of Maruti Suzuki XL6?