Official: Toyota Corolla Altis to be available in India in nine variants 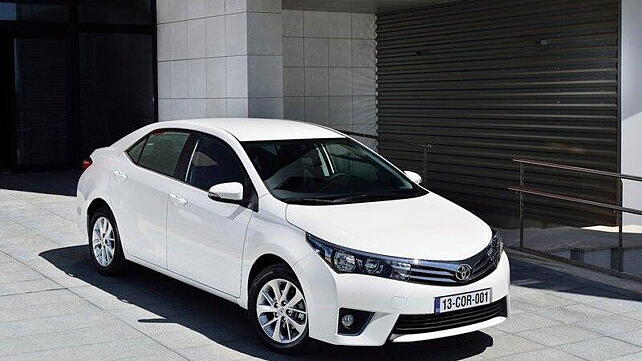 It is official that the Toyota Corolla Altis will be offered in seven variants. While four of these will be diesel, the other three will be petrol. For now, Toyota will not be launching the base variant of the petrol and it might be introduced later as a base version. The four diesel variants are the- J, JS, G and GL while the five petrols are- JS, G MT, G AT, GL MT and VL AT.

All five petrol and top three diesel variants get an LCD touch-screen infotainment system with Bluetooth, USB and Aux-In support. Reverse sensor and steering mounted audio controls are offered in the G, GL diesel and VL, GL MT petrol variants. Leather upholstery, reverse camera and push start/stop system are standard for the top-end GL and VL variants while paddle shift is standard for AT variants.

Automatic headlamps with LEDs are offered only in the top-end GL and VL variants, while the rest get regular halogen units. On the safety front, dual front airbags, ABS with EBD and Brake Assist are offered as standard fitment on all nine variants. Alloy wheels will be offered only on the top two diesel and all petrol variants, except the base JS.

The new Corolla Altis continues to use the engines from the previous car. It comes with a 1.4-litre D-4D diesel engine producing 87bhp and 2015Nm of torque and a 1.8-litre VVT-I petrol engine churning out 138bhp and 173Nm of torque. Both engines send power to the front wheels through a six-speed manual gearbox, though some petrol variant gets a seven-speed automatic unit.

Currently in its 11th iteration, the Corolla Altis made its Indian debut at the 2014 Delhi Auto Expo and is expected to be launched within the next couple of months. It is expected to be priced in the Rs 12 lakh to Rs 17 lakh price bracket and will go up against the Hyundai Elantra, Volkswagen Jetta, Skoda Octavia, Chevrolet Cruze and the Renault Fluence.