Volkswagen Vento is a 5 seater Sedan available in a price range of ₹ 10.00 - 14.42 Lakh. It is available in 3 variants, 999 cc engine option and 2 transmission options : Manual and Automatic (TC). Other key specifications of the Vento include a Kerb Weight of 1138 kg and Bootspace of 494 litres. The Vento is available in 6 colours. The mileage of Vento ranges from 16.35 kmpl to 17.69 kmpl.
61 Reviews 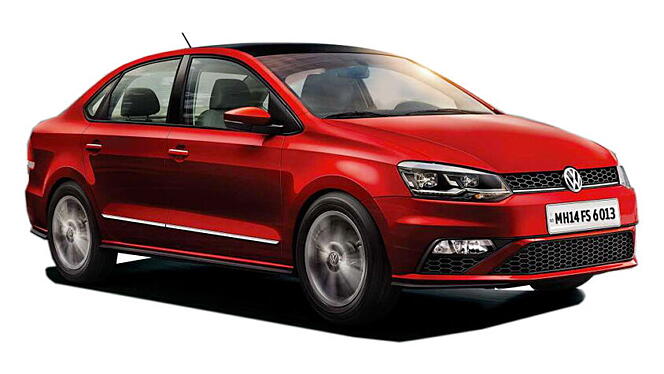 The Volkswagen Vento is available in three variants including Highline, Comfortline, and Highline Plus.

The Volkswagen Vento was introduced in India on 5 March, 2020.

The Volkswagen Vento is exclusively powered by a 1.0-litre, three-cylinder, TSI petrol engine that produces 109bhp and 175Nm of torque. This motor is mated to a six-speed manual unit or a six-speed torque converter automatic unit.

Inside, the Volkswagen Vento gets features in the form of a dual-tone black and beige interior theme, a three-spoke, multi-function, flat-bottom steering wheel; a touchscreen infotainment system with Apple CarPlay and Android Auto, automatic climate control, tilt and telescopic adjustable steering, and cruise control.

The Volkswagen Vento has a seating capacity of five occupants.

The Volkswagen Vento has aged well despite having a dated design and lacking the extravagance that new-age sedans offer. And, it still scores high for being a well-built car and offering rock-solid German build quality with excellent on-road dynamics. Now, the new torque-converter gearbox continues to offer the convenience that buyers in this segment look for.

The Volkswagen Vento with a new torque converter is driven. How does it fare? Read on.

The 2020 Vento doesn't get a diesel version and the only engine option is the brand's 1.0-litre turbocharged three-cylinder mill. This small capacity motor produces the same 109bhp and 175Nm of torque as we'd seen in the petrol manual we reviewed before. We were quite impressed with it and now we see how this silent engine paired with this new six-speed torque converter gearbox performs. It replaces the renowned DSG gearbox offered earlier.

Put the gear selector in drive mode and start releasing the brake. You'll notice the car instantly starts creeping forward due to the slightly higher set idling rpm. There's no hill hold or an auto hold function, which would have held on to this sharp response of getting off instantly. It would have given a sense of safety to new car drivers. Nonetheless, once one gets a hang of it, it’s easy to use effectively in traffic. Especially, without having to modulate the throttle much. As compared to its manual counterpart, the initial lag in power build-up isn't noticeable here. There's ample torque fed in by the new gearbox, which has done a commendable job of improving drivability. And with immediate responses, it doesn't make the engine feel dead or unresponsive before the turbo spools up. Sure, it isn't as quick as the DSG, but it helps put the power to good use and make quick progress.

The Sport mode with sequential shifts allows you to push till the 6,000rpm rev limit before automatically upshifting. This otherwise takes place at around 2,200rpm in the normal drive mode where the engine gets into its element. Post this, you can feel the surge in power helping you go faster. Interestingly, you can keep the engine mostly at around 1,800-2,000rpm in higher gears and still continue doing good speeds of around 80kmph.

So how much of a difference has switching from an advanced tech like the dual clutch autobox to this conventional torque converter made? Not much really. Sure, the DSG was very quick and super smooth with seamless transitions. But the new gearbox isn't half bad. It's fairly quick, responsive, doesn't induce head nods, and complements this engine well. It won't plaster a smile on an enthusiast's face, but surely won't make him make faces. In its latest iteration, this new transmission is also more affordable than the more complex DSG. Hopefully, this one won't be mocked for reliability concerns like the latter. New car buyers will like it for its smoothness paired with a good performance from the motor.

The Vento scores well even in the ride and handling department. Its suspension doesn't give a very plush feel being a little firm, but it absorbs jolts well, given our road conditions. You do hear the thuds if you go fast over bad roads, so it's recommended to slow down. Thankfully it didn't bottom out or scrape its under-belly over big bumps, broken roads, and diversions. Also, the steering is not the lightest in its segment and as a result, slightly more effort goes in while parking the sedan.

But the weighted feel is more of an advantage when on the move. It's responsive too and quickly makes the car turn in the direction pointed at. It keeps the driver engaged and even the passengers remain comfortable for the most part. Unless you go insanely fast around corners, the body roll isn't felt. It remains planted nonetheless. Furthermore, phenomenal high-speed stability and confidence-inspiring brakes make cruising at, or stopping from even triple-digit speeds - a hassle-free affair.

Inside, you get the same VW treatment that you'd get in the Polo. So, it's good to have spot-on ergonomics, perfect driving position and good all-round visibility, even when you sit nice and low. However, this also means it's the same old dashboard layout and design unlike the modern interiors offered by rivals. And it's not the best in terms of deep storage spaces, its placement, and usability. Apart from this, you won't find many faults in the cabin that is old school but practical and solidly built.

Even its seats provide an upmarket feel and are comfortable with adequate support. There's good space in the front row and sufficient in the second, but not as much as is available in the newer rivals. It's still good for two in the back seat but a third person will be uncomfortable due to the tight shoulder room and a central tunnel floor hump. Thankfully, VW's easy access lever enabling more space for the left rear passenger continues, for owners who'll prefer to be chauffeur driven. Besides, it gets a large boot with 494 litres of space to take care of your extended weekend luggage.

When it comes to features and equipment, VW has left us in a position where it's difficult to find middle ground. It gets practical features and now even a touch screen unit compatible with Android Auto, Apple CarPlay, and Mirrorlink. Then it tries to match up to the competition with automatic climate control, rear AC vents, cruise control, rain-sensing wipers, auto headlamps with LED lights, et al. It's equipped with safety features like four airbags, a rear camera with parking sensors, traction control, ABS with EBD, Isofix seats, etc. Still it gets an analog instrument cluster with monochrome display, misses out on hill-hold, key-less entry, engine push-start button, sun-roof, wireless charging, automatic tailgate opening, and such bells and whistles that we've come to see off late in this segment.

There's nothing that is wrong with the Volkswagen Vento as a product, but the competition like the Hyundai Verna and the Honda City make it look bland and boring. These sedans have evolved over the years while the Vento still remains more or less the sedan that came in India 10 years ago. This might be a deterrent for buyers along with VW's inconsistent service. But again, the Vento definitely holds itself up well for its German build, quality, excellent ride and handling, usable features, and this automatic convenience.

The Volkswagen Vento with a new torque converter is driven. How does it fare? Read on.
Read More

Volkswagen has put the BS6 version of the Vento sedan on sale in India along with the Polo hatchback. This 2020 VW Vento is priced between Rs 8.93 lakh to Rs 13.29 lakh, ex-showroom. Does the new down-sized 1.0-litre TSI engine compromise on performance? We find out while focusing on the advantages and disadvantages of buying this sedan.
Read More

The new facility in Chennai becomes the 16th service centre for the brand in the Tamil Nadu and Pondicherry region. The service centre hosts 21 bays that can undertake maintenance, general repairs, as well as body and paint work.
Read More

Volkswagen India recorded a Y-o-Y growth of 84 per cent. The brand has witnessed its strongest performance in the last four years.
Read More

Q: What is the on road price of Volkswagen Vento?

The on-road price of Vento in Delhi starts at ‎₹ 11.51 Lakh and goes upto ‎₹ 17 Lakh. The on road price is made up of ex-showroom price, RTO registration, road tax and insurance amount.
Read More

Q: How much will be the EMI or down payment for Volkswagen Vento?

Q: Which car is better between Volkswagen Vento and Skoda Rapid TSI?

Q: What is price of Volkswagen Vento top model?

Q: What is the mileage of Volkswagen Vento?