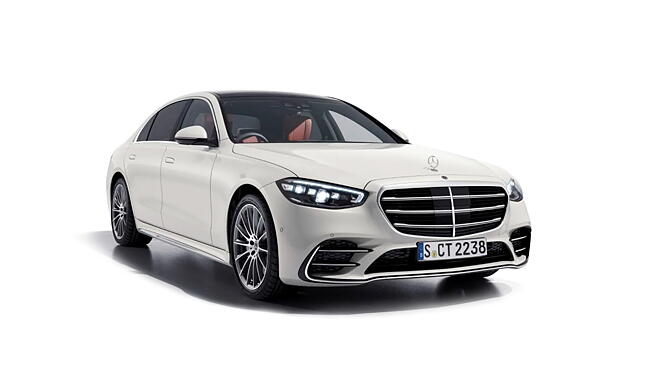 Mercedes-Benz has launched the new-gen S-Class in the country. The model, which arrives in the country through the CBU route, is available in two variants that include the S450 and S400d.

Under the hood, the Mercedes-Benz is offered with two powertrains that include 3.0-litre, six-cylinder petrol and diesel engines. The petrol motor is capable of producing 367bhp and 500Nm of torque, while the latter is tuned to produce 330bhp and 700Nm of torque. A nine-speed automatic transmission is standard across the line-up.

For almost ever, the Mercedes-Benz S-Class has been the quintessential choice for those who want nothing less than from their top-of-the-line luxury sedan. One that oozes space, comfort and refinement, along with the latest in safety and technology. Previously introduced as a CBU model, the S-Class is now locally assembled in India.

We have driven the latest iteration of what has been the 'best car in the world' for years. So how's it like?

The most thought-provoking thing about the new Mercedes S-Class is that it’s gorgeous as much as it’s stately and lavish. Now there is hardly any disputing the fact that it’s effortlessly comfortable on the move, sophisticated inside and above all, a dignified home on wheels but what’s particularly impressive about this W223 gen S-Class is how good it looks. Yes, yes, I am aware that looks are subjective and beauty is in the eye of beholder but in a world wherein car designs are seemingly fussier with every new generation; the new S-Class remains a monument to clean yet sophisticated lines and sharp creases which add to its majestic stance.

Yes, it’s the all-new S-Class or the W223 in Mercedes lingo. So what’s new? Well, everything right from the platform, the engines, the tech and the S Class’ ability to cocoon its passengers from the outside world.

Given that it’s an S-Class, there is a solid chance that the owners would spend 100 per cent of their time in the back rather than the driver’s seat. So let’s take you through the proper S-Class experience that can only be felt at the back. Stepping inside is an experience by itself. You are greeted with expensive leather, wood and extremely well-polished metal surfaces. Business-class seating is perhaps the best term that anyone can use to describe sitting in the back of an S-Class. Now, you are cocooned in glory and have a wide variety of gadgets at your disposal to make your journey as comfortable as possible.

Once settled in those massive rear seats, you get the option to be massaged in over a dozen different ways while enjoying a movie on the screen in front of you, the sounds of which will assault your senses thanks to the 4D surround sound system by Burmester. Now we did find the MBUX infotainment system a bit confusing to use and it is something that takes time getting used to.  The look and feel of the cabin from the front seat is completely different than that from the W222 S-Class and it’s most noticeable because of the giant central display that’s very crisp and bright and it responds immediately to your touch inputs with no lag whatsoever. It uses the latest MBUX operating system which I admit can get a little overwhelming to use at first but it’s not complicated by any means. Then there’s the touch sensitive controls on the steering wheel which, again, aren’t the most intuitive to use. Call me old school but I would rather have physical buttons for all the controls on my steering wheel so there’s that.

In terms of rear seat comfort, it goes without saying that even exceptionally tall people would be comfortable spending hours in here – the cushioning is comparable to that of a posh sofa and because the wheelbase stretches over 3200mm, there is tremendous amount of legroom and the overall sense of space is immense.  Now the left rear seat also has the option of stretching out completely, but that’s at the cost of the front passenger accommodation. Let me explain. So you have something called as the chauffeur package which allows the front passenger seat to completely move forward including its headrest which can folded down flat. It will also pop out the rear seat footrest and recline the backrest for you so that you can be seated in absolute comfort and probably fall asleep in no time. But I have to say that this entire arrangement takes its own sweet time. It’s a good thing then that one can resort to one of the many, many features here at the back while the seats get adjusted.

Swathed in one of the finest quality leather, wood and aluminum, the S350d’s cabin is a powerhouse of features including multiple zone climate control, seats with a zillion different adjustments, digital screens everywhere and just about every new tech that you can imagine.

At the back, you have up to sixty four colors for the ambient lighting to set the mood, electrically operated sun blinds all around you, cushions for all the headrests, a removable tablet to control the screens, climate control functions and what not. You also get a wireless charging pad at the back and cup holders with heating and cooling functions.

The new S-Class gets two engine options for India. So there’s the S450 petrol and the S350d and given that diesel is still the more popular choice among limousine buyers, we decided to have the S350d for the review. Now, this three-litre, in-line six cylinder motor is no regular diesel engine. It is in fact the most powerful diesel engine from Mercedes Benz yet, although, when compared to the fully imported and now discontinued S400d, power is down from 330bhp to 286bhp for the locally assembled S350d. The torque output is also down from 700Nm to 600Nm. The 350d version also misses out on all-wheel drive and rear wheel steering and while we are completely okay with not having AWD, we did miss rear wheel steering while getting in and out of parking or navigating through crowded areas.

As with all the generations of the S Class, this car's strength lies in the ability to completely isolate you from what's going around you. This diesel engine for instance, it's so quiet and refined that you don't hear it for the most part. It's only when you go anywhere above part throttle that you'll hear it working.  Compared to the fully imported and now discontinued S400d, power is down from 330bhp to 286bhp for the locally assembled S350d. The torque output is also down from 700Nm to 600Nm. The 350d version also misses out on all-wheel drive and rear wheel steering and while we are completely okay with not having AWD, we did miss rear wheel steering while getting in and out of parking or navigating through crowded areas.

We also need to acknowledge the nine-speed torque-converter automatic which is a real beauty. Gear changes are pleasingly nice and smooth, which is great, but what’s even better is their relative quickness.

Then there's the air suspension which is among the quietest systems we have experienced. The system really helps in delivering what we like to call a magic carpet-like ride. And that cushy road behavior is helped quite a bit with these 19-inch wheels as opposed to the 20-inchers that the fully imported S400d came with. The taller profile tyres on these 19-inch wheels make the ride a lot more absorbent and we have driven the S400d in the past and there is a noticeable difference in plushness over bad roads.

The cabin is also well insulated from the outside world – the constant racket of auto rickshaws, heavy vehicles and the incessant honking are all reduced to a hushed murmur when all the windows are up. Overall, the sense of comfort and ambience is largely unaffected by what’s going on outside although there is a touch more engine noise than what’s expected when you go beyond part throttle.

The new S-Class is all the things we have always loved about the flagship sedan from Mercedes. Yes, its appearance may divide opinions and over time it’s gotten quite expensive as well but then so have all its rivals. And let’s be honest, in many key areas like rear seat experience, brand value and technology, it is still the most affluent of them all. This new W223 generation offers performance and composure in equal measures and as far as I am concerned, it is undoubtedly the most comfortable and classy set of wheels that one can buy for under Rs 2 crore.

By Sagar Bhanushali27 days ago

We have driven the latest iteration of what has been the 'best car in the world' for years. So how's it like?
Read More

All-new Mercedes-Maybach S-Class – All you need to know

Mercedes-Benz has announced a price increase of up to three per cent. The company has revealed the updated prices for its model range.
Read More

By CarWale Team2 months ago

The winners will be announced this evening
Read More

Q: What is the on road price of Mercedes-Benz S-Class?

The on-road price of S-Class in Delhi starts at ‎₹ 1.89 Crore and goes upto ‎₹ 1.92 Crore. The on road price is made up of ex-showroom price, RTO registration, road tax and insurance amount.
Read More

Q: How much will be the EMI or down payment for Mercedes-Benz S-Class?

Q: Which car is better between Mercedes-Benz S-Class and BMW 7 Series?

Q: What is price of Mercedes-Benz S-Class top model?

Q: What is the mileage of Mercedes-Benz S-Class?

The Mercedes-Benz S-Class mileage is 12.82 kmpl.