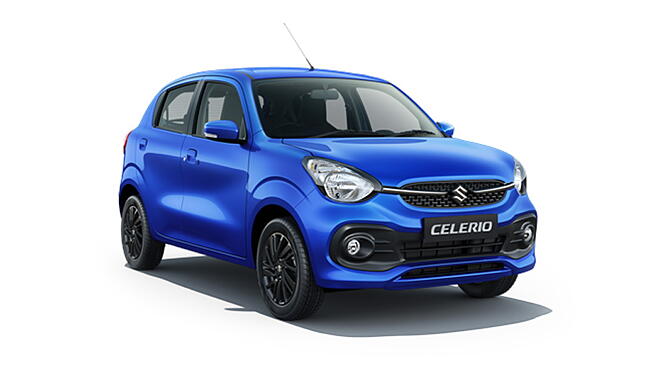 The new Maruti Suzuki Celerio is available in four variants including LXi, VXi, ZXi, and ZXi+.

The 2021 Maruti Suzuki Celerio was launched in India on 10 November.

The new Maruti Suzuki Celerio has a seating capacity of five occupants.

As far as fitness of purpose goes, the new Celerio is right on the mark.

The new Celerio gets a revised one-litre, three-cylinder engine. And though it’s not more powerful compared to the older one, the new one is more efficient, more drivable, and it has good NVH too; especially for a three-cylinder. Maruti has worked on reducing the internal friction in the engine; it has used lighter components, and it has thrown in more tech to make the engine more agreeable. The K10C uses dual fuel injectors for better atomisation, which in turn helps return better efficiency. It employs variable valve timing and lift on both the exhaust and intake sides to help improve driveability at lower revs. And it employs exhaust gas treatment to reduce emissions; so much so that this engine is now BS6 Phase Two compliant.

The engine also sits on a pendulum mounting system now. This, in theory, should cut back on the general three-cylinder engine vibrations that passengers feel inside the cabin, particularly at idle and when starting the car. And it’s immediately obvious that it works on the new Celerio.

There are barely any perceptible vibrations at any of the touch points, then be it the steering, the gear shifter, the pedals, or the seat. Even when revving the engine close to its redline, there are no awful vibrations. The engine also doesn’t sound stressed or unrefined at high revs.

On the performance front, there’s a potent low and mid-range grunt on offer. Not enough to get the front wheels to spin under acceleration or even to get the car to 100kmph from standstill in 10 seconds. But, it’s enough to leave you feeling that the Celerio is a light and peppy car. Enough also really to easily make gaps in traffic, and make quick overtakes on interior single-laned Rajasthan roads.

In fact, with the alert throttle response and the engine’s willingness to rev, it makes for a happy and enjoyable runabout. It’s more fun with the five-speed manual with its well-positioned gear shifter offering slick shifts and a short-throw action. But, the AMT or AGS isn’t bad either. It is the more convenient option, of course, particularly in slow-moving, bumper-to-bumper traffic. And Maruti has calibrated it well. It is intuitive, responsive, and predictable enough to work solely off throttle inputs without any real need to use the manual override function. But, yes, it’s nowhere as good as the manual if it’s a spirited and more involving driving experience one is chasing.

But, attempt going over the latter any quicker, or even show the car a series of bumps or potholes, and the ride turns noisy and crashy. The suspension also takes longer to settle than one would like, which makes the ride seems busy, particularly over a poor section of the road. There’s no pronounced side-to-side movement, and the Celerio’s rear rarely bucks to launch its occupants off the seat. But, the difference in the car’s low and high impact ride is so stark, it dilutes the overall comfort co-efficient of the car.

One of reasons an average of eight to nine thousand people bought Celerio’s every month, was the practicality it offered. The new one builds on that. It has spacious seating for four adults; it has a significantly bigger boot now, and it remains easy to drive courtesy of good visibility and light controls. What’s more, the overall look of the cabin has been upgraded significantly.  It’s still all hard plastic that defines the new Celerio’s cabin. But, the design of the dash, the tight fit all around, and the chrome and brushed aluminium highlights sprinkled all over, give the cabin a more upmarket and premium air. We also liked the design of the seat fabric, since it enhances this feeling further. Additionally, the buttons, the stalks, the dials, and the levers all around don’t feel flimsy and work well.

Like we mentioned earlier, the new Celerio offers spacious seating for four. There’s good knee and head room for the rear passengers, and with just two at the back, there’s enough shoulder and elbow room too. But, the rear seats don’t come with adjustable head rests, which is a miss. And the seat bottom cushioning could be better too; to lend more support, particularly for the thigh.

There’s no such issue with the front seats, and these are comfortable to spend hours in. The fronts too don’t come with an adjustable headrest, but the design of the seat compensates for that. We also like the driving position the height-adjustable driver’s seat and rake adjustable steering offers. This, however, is true only for the top-spec trim.

Another strong attribute of the new Celerio is the ease of ingress/egress it offers. With its wide-opening doors, high seats, and tall door opening, it is quite easy to get in and out of. So the elderly should appreciate that.

The top-spec Celerio we have here retails for Rs 7.5 lakh on the road for the manual version. And this puts it within striking distance - price-wise - to the Hyundai i10 Nios Sportz (Rs 7.8 lakh, OTR). Now, in terms of features, the Celerio falls behind by a bit. Yes, the Hyundai is slightly more expensive. And so, in that sense, the Celerio is more par for the course than an outstanding offering when it comes to equipment.

So, one gets height-adjustable driver’s seat,electrically adjustable ORVMs that fold, a multimedia system with Apple CarPlay and Android Auto, and a rear windscreen wiper. The AMT, meanwhile, also gets a hill-hold function, which should make life easier for those new to automatics.

The Celerio in its new generation avatar is a much nicer car. It looks younger and more desirable. It looks more upmarket on the inside. It has a bigger boot. And it remains easy to drive and live with. It has also upped the NVH, the driveability, and the fuel efficiency game with the updated K10C engine. And the AMT version is convenient, while the manual is enjoyable.

It’s not exactly a steal or fantastic value for what it is, what it offers, and the price it comes at. But, for someone looking for a spacious, nice to drive, easy on the eyes, the first car that won’t break the bank, the new Celerio checks the right boxes.

As far as fitness of purpose goes, the new Celerio is right on the mark.
और पढ़ें

India is the third country to get this update
और पढ़ें

Select Maruti Suzuki dealerships in India are offering a range of discounts across the product range this month. These benefits are offered in the form of cash discounts, exchange bonus, and corporate discounts at the Arena as well as the Nexa dealerships.
और पढ़ें

Select Maruti Suzuki dealerships in the country are offering discounts on the Arena range of models this month. These benefits are available in the form of cash discounts, exchange bonus, and corporate discounts.
और पढ़ें

Maruti Suzuki has hiked prices of all the models in the Arena and Nexa range. This is the second price increase from the brand this year.
और पढ़ें

Read below to learn more about the key feature differences between these two siblings.
और पढ़ें