Jaguar XJ L
Jaguar XJ L is a 4 seater Sedan with the last recorded price of Rs 99.56 Lakh - 1.97 Crore. It is available in 6 variants, 1 engine option and 1 transmission option : Automatic. Other key specifications of the XJ L include a Ground Clearance of 120 mm, Kerb Weight of 1988 kg and Bootspace of 520 litres. The XJ L is available in 7 colours. The mileage of XJ L ranges from 9.4 kmpl to 12.9 kmpl. 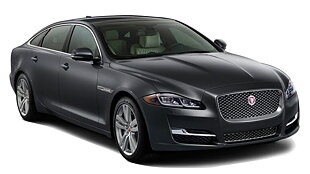 XJ L is available in 6 variants. All the variants are Automatic.

There is a lot to like about the Jaguar XJ L. It looks unique and is the full-fat British luxury sedan amongst the German triad. Inside the extravagant cabin, the front seat comfort is really good, overall build quality is solid and ride and handling balance is better than the rivals. But the XJ has been around for so long no that it feels a bit dated.

The XJ50, in essence, is an homage to Jaguar’s flagship and possibly the last hurrah for the current generation XJ which has been around for nearly a decade.

There is something symbolic about driving the Jaguar XJ50 special edition. That’s not only because it marks 50 years of the XJ’s existence with the first XJ6 appearing way back in 1968, but also the fact that there is a sense of purity to this big luxury barge that few cars can match. So what is it, really? The XJ50, in essence, is an homage to Jaguar’s flagship and possibly the last hurrah for the current generation XJ which has been around for nearly a decade.

The XJ is a big sedan, no matter which way you look at it. Over 5.2 metres long and nearly 2 meters wide, it would barely fit in our parking slot. Despite its age, the big Jag manages to turn heads easily even today thanks to its harmonious proportions, low-slung stance and some nice design touches like the wide mesh grille and the steeply raked C-pillars that are designed to gel seamlessly with the rear glass. The updates on the XJ50 include entirely different front and rear bumpers, black finish for the grille, 19-inch wheels and XJ50 badging over the boot lid and side vents.

A strong whiff of leather hits you as you step inside the XJ50. Although its nowhere near as modern looking as the space-age cabin of the new Audi A8 or the BMW 7 Series, the XJ’s inside has that old-school charm and appears like it has been handmade as opposed to assembled, thanks to the diamond-quilted seats and well finished wood adorning most of the cabin.

Besides a different grade of leather, this special edition also adds an XJ50 logo on the centre armrest, XJ50-badged illuminated tread plates, anodised paddle shifters and bright metal pedals. It’s a credit to the original dash layout that it still looks plush and expensive. That said, some of the materials like the window switches and the centre console buttons feel average for the price. The feel of Jaguar’s rotating gear knob, a novelty item no less, cannot match its appearance either.

The fully digital instrument cluster is impressive with its high resolution and some neat graphics, but the 10-inch touchscreen system on the dash is a little slow to respond and feels a generation behind the German rivals. Given that there are owners who spend a fair bit of time upfront, it has to be noted that the front seat comfort in the XJ50 is as good as it can get by modern limo standards, thanks to a gazillion adjustments and the massage function. The foot well though is quite cramped because of the wide central tunnel, something that has always bothered us in every version of the XJ we have tested.

As for the all-important rear seat experience, it’s akin to some airlines’ business-class seats as you fold down the tray tables or flip either of the 10-inch screens. Naturally, there is acres of legroom and the leather seats offer incredible amount of back and under thigh support. In fact, the backrest and seat base can not only be electrically reclined and adjusted, but also be used as effective stress busters, thanks to the eight-level massage function. All in all, the XJ50 is a proper limousine with plenty of legroom and more headroom than its couple-like roofline would have you believe.

Under the long bonnet sits a 3-litre straight-six diesel engine that develops 300bhp at 4,000rpm and 690Nm of torque at 1,800rpm. It’s the only powertrain you can have with the XJ50 and if you ask us, it’s more than potent enough to haul this big old thing with ease. There is plenty of torque down low giving you effortless acceleration, even when you are driving at triple digit speeds. Given its luxury limo credentials, the build-up in power is gradual through the rev range and peaks at 4000rpm, meaning if you really want to get somewhere quickly, you will be exploiting this sweet sounding motor’s strong bottom and mid-range.

Throttle response is frankly brilliant – there is virtually no turbo lag and when this 1.8-tonne behemoth gets moving, there is no giving in thanks to the seamless shifts from the smooth-shifting 8-speed automatic. 0-100kmph comes up in a rather quick 7.18 seconds and the XJ proved to be pretty swift in-gear as well, completing 20-80kmph sprint in just 4.28 seconds. Mind you, these figures are still marginally slower than the 7 Series and the new S-Class.

The XJ has always stood out for being rewarding through the corners and this special edition is no different. Given its heft, it’s surprising how pointy and stable it feels while handling mid-corner bumps. In fact, the XJ has better turn-in feel than even the big BMW and overall, the body control is wonderful. This is despite the suspension being quite soft which means you do feel the XJ moving up and down over flat roads, however, it never feels floaty. The self-levelling air springs at the back offer a near perfect ride quality, with great bump absorption and hardly any jitters. That said, the XJ50 is just not as isolated as the new S-Class or the 7 Series – there is some noise associated with the standard front suspension across sharp ridges.

The XJ50 continues to be a rather special alternative to the traditional German limousines, mixing old-school charm with driving thrills. It’s over 1.8 tonnes but as you get behind the wheel and drive it, you would be hard-pressed to feel its heft. But should you buy one over its much newer alternatives? Probably not. The XJ50 may be quite charming but there is no denying that in many key areas such as technology, quality and rear seat comfort it falls behind the Germans.

The Jaguar XJ50 is priced at Rs 1.35 crores (on-road) and competes with similarly sized cars like the Mercedes S 350D and the BMW 730LD.

The XJ50, in essence, is an homage to Jaguar’s flagship and possibly the last hurrah for the current generation XJ which has been around for nearly a decade.
Read More
For the latest model

By Venkat Desirazu6 years ago

In the past, car design used to be an art. A chassis was purchased and handed over to a coach builder for design and personal touches. Such vehicles reflected the class and taste of the owners as well as the company that built the car. The pioneers in this type of building were the British whose sensibilities were reflected in their vehicle’s lines, shapes and overall design.
Read More
For XJ L [2014-2016]

Jaguar Land Rover cars available with discounts of up to Rs 31.40 lakhs

The discounts will be valid for the month of October 2019.
Read More

The new facility is spread across 4,460 square metres and it displays a wide range of Jaguar and Land Rover vehicles.
Read More

The Jaguar XJ will be the first new electric car to be produced at the plant.
Read More
Write Review
View All XJ L User Reviews