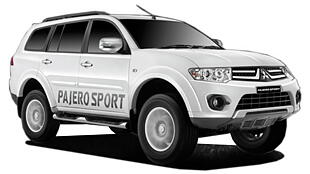 The premium seven-seater SUV segment has seen an overhaul in recent times, but the Pajero Sport continues with its old school styling and features. It's this SUV's bulky yet balanced styling and cult following, that Mitsubishi continues to offer it in India. Backed by a very sparse sales and support network, many things go against the SUV in times when a lot more is expected from a product with its price.

The Pajero is the sole reason that Mitsubishi has managed to keep afloat in India. In fact, the car that is on sale today is not even the real Pajero; Mitsubishi tactically rebadged the second generation of the Challenger to take advantage of the brand name.

So while the car seems to be doing well, we try find out if this is purely on the cult following or the Pajero Sport is one of the better options in the premium SUV segment.

The Pajero is the sole reason that Mitsubishi has managed to keep afloat in India. In fact, the car that is on sale today is not even the real Pajero; Mitsubishi tactically rebadged the second generation of the Challenger to take advantage of the brand name.

So while the car seems to be doing well, we try find out if this is purely on the cult following or the Pajero Sport is one of the better options in the premium SUV segment.

The Pajero Sport is a big car and much to the delight of the SUV lovers, it shows its size in a not so subtle manner. It has a straight face that goes well with the size and design of the car. The angular headlamps are connected via similarly sized chrome grille and just the front bumper looks bigger than half the entry-level hatchbacks.

The Pajero gets a front bash plate with a high approach angle, which will certainly help in off-roading, but from the design perspective, it makes the car look tall and lean unlike its rather bulky competitors. The side profile also has all the right elements to make it look like a brawny off-roader. The pronounced wheel arches, contrasting roof rails, side step and the massive wheel well, all do their bit for the design but the rear looks hurriedly done. The tail lamps look nice, so does the spoiler at the top, but somehow does not seem appealing especially considering that this is a big old-school SUV.

Overall, the Pajero is the nicest looking SUV; where the Fortuner is overtly bulky and the Endeavour is excessively long, the Pajero has a nice balance in terms of styling.

The interior, similar to most of the premium Japanese cars is beige and clutter free. There is some fake wood on the dashboard (again much like rest of the Japanese makes!), but the fit and finish does not feel premium. The layout is old with a glossy finish for both the faux wooden and silver inserts. The rotary knobs are similar to the ones found on cars two segments below, the touchscreen looks aftermarket and the rest of the features list isn’t very attractive either.

On the other hand, the car has plenty of space especially in the first two rows. It gives you that big car feel expected from SUVs of this size. Once you are in the cabin, you can feel its towering presence.  The seating is plush with a comfortable second row that can accommodate three people and getting in and out of the third row isn’t too difficult either. But, with the high floor, the third row isn’t really comfortable; children won’t complain much but adults won’t want to spend more than an hour here. The Pajero offers decent amount of boot space even with all the three rows in place and the last two rows can be folded to liberate enough space to move a house.

The Fortuner fairs decently on space. The features list also isn’t too bad either when we consider the Fortuner and Endeavour, but take into account the Santa Fe and all of them look drab.

The Pajero is powered by the 2.5-litre turbocharged diesel that puts out the same 176bhp and 350Nm of torque in both rear-wheel-drive manual and automatic variants. The torque and power delivery are decent and this two-tonne SUV can reach speeds easily even with the slightly lazy torque convertor on the version that we tested.

The engine, however, is extremely noisy; floor the pedal and the revs will build up instantly, but so does the noise levels in the cabin and vibrations on the pedals. The automatic is fairly decent, it is nowhere as quick as the new-age dual-clutch transmissions, but compared to the units on its competitors, this one works much better. The AT also gets paddle shifters and they mostly come handy in providing some engine braking that is otherwise missing, since the setup is tuned for efficiency. Get off the throttle and the revs dive close to 1,100rpm and it gets unnerving driving the car without any engine resistance.

The ride unsurprisingly is soft and till the time speeds are under check, taking on all the bad roads is relatively easy. There is body roll, of course, and though it is not much of an issue at low speeds one needs to be extra careful on the highways considering the comfort of the passengers. Good handling is not exactly expected from the vehicle of this size, though Venkat’s experience in a 4x4 manual and Hiroshi Masuoka at the helm, puts things in a different perspective.

The steering could have been better, it needs four turns lock-to-lock and that multiplies the effort to a great extent. Also the braking is spongy and planning every move is essential. Individually all these factors might seem negative, but compared to similarly built old school rivals, the Pajero is a better product.

The entire segment of premium seven-seater SUVs will see an overhaul in one year with the launch of the new Mitsubishi Pajero Sport, Toyota Fortuner and Ford Endeavour. If you don’t intend to wait till then, the Santa Fe is the only modern car, which also offers more power and better features albeit with a certain drop in interior space.

Among the rest, the Pajero Sport AT is definitely the better option in terms of looks and mechanical package; we just wish Mitsubishi could offer better service network and support.

When to expect - September 2020 (Tentative)
Notify me

Mitsubishi recently unveiled the third generation Pajero Sport SUV. Derived from the Triton pickup truck it retains all the butch elements of the current vehicle but has been given the chrome treatment and a modern design to make the car contemporary. It may be displayed at the 2016 Auto Expo and will be launched in India by the middle of next year.
Read More

The Pajero is the sole reason that Mitsubishi has managed to keep afloat in India. In fact, the car that is on sale today is not even the real Pajero; Mitsubishi tactically rebadged the second generation of the Challenger to take advantage of the brand name. So while the car seems to be doing well, we try find out if this is purely on the cult following or the Pajero Sport is one of the better options in the premium SUV segment.
Read More

Mitsubishi in loss again- to axe Pajero SUV next year

Mitsubishi Motors Corp today announced that it expects the second year of losses- this year’s primarily fuelled by the Coronavirus outbreak. This is Mitsubishi’s biggest recorded loss in the last 18 years. As it expects an operating loss of 1.3 billion USD (year ending March 2021), the company stares at shrinking its workforce/production, and/or close unprofitable dealerships in the time to come.
Read More

By Omkar Thakur1 year ago

Here are the top five changes on the latest iteration of the Mitsubishi Pajero Sport Select Plus edition.
Read More

Top 5 most powerful SUVs in India under Rs 35 lakhs