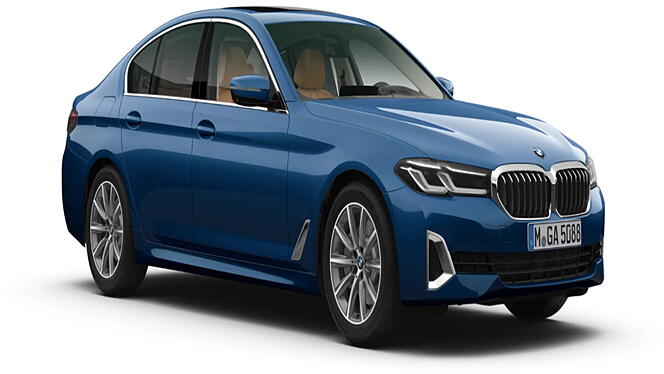 BMW has launched the facelifted 5 Series in India. Unveiled in May last year, the refreshed model is available in three variants that include the 530i M Sport, 520d Luxury Line, and the 530d M Sport.

The BMW 5 Series is comparable to a seasoned middle-order batsman. One that’s dependable, who would score runs easily, hold on to the pitch regardless of the situation and trouble the other team when on the pitch.

BMW 5 Series is comparable to a seasoned middle-order batsman

You have to give it to BMW for making a diesel engine so refined you’d have to double-check that it’s not a hybrid or an electric. This 2.0-litre four-cylinder diesel does duty in many 20d marked vehicles in the BMW line-up. Power outputs for the 520d we have here are 188bhp at 4,000rpm and a twisting force of 400Nm that is accessible from 1,750rpm. With this update, the turbodiesel has also gained a mild-hybrid system which is one of the many other fuel-saving measures BMW employs of late.

Offering a boost of 8kW/10bhp, the 48V mild-hybrid claims to improve power delivery as well as efficiency at cruising speeds. It also regenerates some energy when braking. But we found it to work inconspicuously without making its presence known in day-to-day driving.

Getting back to the engine – the four-banger diesel is refined yet it’s no slouch. It might not be as punchy as the 530d, but it has enough torque supply right from the word go and there’s never a feeling of lack of power when pushing through urban commutes or stretching some legs out on the highway. While the motor happily potters around between 1,500-2,000rpm effortlessly, smash the throttle hard and it caters a strong pull all the way to the red-line. It won’t pin the passengers in their seats, but it’s enough to keep the driver entertained.

Past the 3,000rpm mark is when the motor starts to get vocal but never does it feel vibey or unrefined. Its linear performance makes this diesel deceptively quick. In our test figures, the 0-60kmph came up in 3.46 seconds and 0-100kmph took a brisk 7.54 seconds. Even roll-on acceleration was impressive as the 520d took 4.94 seconds to accelerate from 20kmph to 80kmph in third gear, and 6.05 seconds for 40-100kmph in fourth gear.

Working in tandem with the well-engineered motor is an eight-speed automatic transmission. It’s a torque converter that remains seamless when driving sedately but can make its gearshifts known when pushed hard – especially when in kick-down for some quick overtakes. Otherwise, the eight-speed Steptronic hits all the right notes all the time. And there’re paddle-shifters provided behind the wheel too, for when you decide to play around with gearshifts.

Needless to say, the 520d, too, gets driving modes namely Eco Pro, Comfort, Sport, and Individual. Switching the buttons sequentially from Eco Pro to Sport – the throttle response, damper setting, and steering feel get sharper and more responsive. And in Individual, the settings are claimed to adapt on their own depending on the driving situation, but this is another thing we’ll have to take BMW’s word for it as it didn’t seem to make any noticeable difference.

There are no major changes under the skin of this updated 5 Series, so it continues to offer a well-balanced ride – another thing that BMW appears to have got right with this generation model. At slow speeds, there’s a hint of stiffness but all the bumps and creases are absorbed with a good level of finesse – and the stiffness never gets to the point of being uncomfortable. Even on rutted and sharp-edged road irregularities, the suspension doesn’t crash but takes it in stride with a sense of sturdiness. And at higher speeds, it only gets better absorbing anything from small creases to large undulations with assurance, thanks to those adaptive dampers.

Riding on 245/45 R18 Michelin Pilot Sport, the grip levels are impressive too when pushed hard. Especially through corners, it sticks like no sedan weighing close to 1.8tonnes would be able to. But most of its weight is felt when chucked suddenly. Even the steering wheel has a certain heft to it but it’s easy to operate – thumbs up from those who prefer taking the wheel more often. It’s got one of those adaptive steerings that changes response depending on speed. So going three full turns lock-to-lock when stationary or at town speeds feels slow, especially in the Eco and Comfort model. It’s much better and sharper in the Sport mode which is where we’d prefer to adjust its setting all the time.

Lastly, it’s a low-slung sedan – which means there’s always a mindful of scraping it over some of the improperly made speed-breakers or large potholes. But we are happy to report that most of those ill-shaped breakers were overcome with relative ease with only a few posing a serious problem to the underbelly.

If you have seen one you have seen them all is what best describes BMW's cabin. But look closely in this new 520d LCI and you’d notice a larger floating screen on the centre dash – which is also a touchscreen – and an all-digital driver’s display. Meanwhile, the rest of the cabin remains unchanged and everything is exactly where you’d expect it to be in any other BMW. Space upfront and visibility are sufficient to go around town fairly easily. But a low seat height means that only the fairly younger knees would find it comfortable to get in and out easily – the older knees, not so much. Customers can also configure the leather upholstery through BMW's equipment list while the wooden trims across the dash look classy, to say the least.

Even the seats are large and accommodating, with comfortable support in all the right places. We found the larger 12.3-inch touchscreen a bit hard to reach, especially when the seatbelts are on. But there’s the characteristic iDrive controller dash that comes in handy.

This newer screen is not only bigger but throws out all the possible information, navigation, and vehicle settings and status that you could ask for. Adding an all-digital display for the driver’s screen is another welcome addition, but the charm of an old-school analogue dial will surely be missed.

As most of the owners would be spending a majority of time in the second row, it needs to be comfortable and spacious. Spacious it is with a good amount of legroom, a decent headspace, and a large cabin for two to sit in comfort. Making a third passenger sit in the middle would be farfetched though. And if we were to nitpick, we’d have preferred a slightly more reclined angle for the backrest by a few more degrees. And some more gizmos and trinkets at the back to keep the passengers entertained wouldn’t hurt either. Lastly, the boot is large at 530litres and is more than sufficient with the spare wheel shoved underneath.

As mentioned earlier, we have got the 520d in the Luxury Line trim. So, it ticks many boxes for features and equipment expected from a mid-size luxury sedan. It includes four-zone climate control, a large electric sunroof, powered front seats with memory functions and lumbar support, wireless charger, a 360-degree camera with park assist, Harman Kardon sound system, in-built navigation system with smartphone integration through Apple CarPlay and Android Auto along with BMW Assist, ambient lighting, and BMW’s party pieces – the gesture control and Display Key that can also remotely park the 5 Series in tight parallel spaces.

There’s also a whole gamut of driver-assist and safety features available as standard in the 520d Luxury Line. But we’d have liked to see the ventilated front seat, a heads-up display, as well as panoramic sunroof to oomph up the in-car opulence.

An update to the G30-gen 5 Series gets tasteful design updates both inside and out – which this Bavarian mid-size luxury sedan needed after being around for four years. Especially since its German counterparts i.e. Mercedes-Benz E-Class received an update recently while the Audi A6 entered into a new generation. On the 5, its sleeker headlamp design with an L-shaped lighting signature has the same drama as the ‘angel eyes’ of the E60-gen 5 Series. And the blacked-out finishes on the tail lamps make it appear even more handsome.

The updated 520d – with its tweaked styling, newer features, and slightly improved powertrain – makes for a seasoned campaigner whom you’d ardently want on your team. It’s got the right temperament, a versatility that adapts according to the requirement, and does what’s asked of it with a certain finesse that comes only with its skill and experience. We wonder, could it be the Rahul Dravid of the car world?

Today I am feeling important. Like a CEO or an entrepreneur out on his fun weekend. I might even receive a call from a quietly competent assistant who will brief me about the week ahead. But right now, all I want to do is attack the next corner. You guessed it right. I am driving a fast saloon, the new generation BMW 5 Series and the 530d at that. Of course, I am grinning from ear to ear as I punch this barge through everything to find out if it is really the executive luxury sedan you would want to buy.
और पढ़ें
5 सीरीज [2017-2021] के लिए

BMW somewhat lost their way with the F10 generation 5 Series which was launched in 2010 in India. Sure it was more luxurious than before but it felt too heavy and lofty as compared to the agile E60 gen. So with the new generation G30, BMW are aiming to blend luxury and taut driving dynamics more seamlessly and going by the spec sheet they have thrown the kitchen sink at this brand-new 5 Series.
और पढ़ें
5 सीरीज [2017-2021] के लिए

BMW India will increase prices up to 3.5 per cent from next month. The price hike will be applicable across the model range.
और पढ़ें

The ninth edition of The Valley Run was held at Amby Valley in Lonavla, Maharashtra on 3, 4, and 5 December, 2021. The event saw the participation of more than 700 contestants under various categories. What all happened over the three-day period of the event? We get you all the details.
और पढ़ें