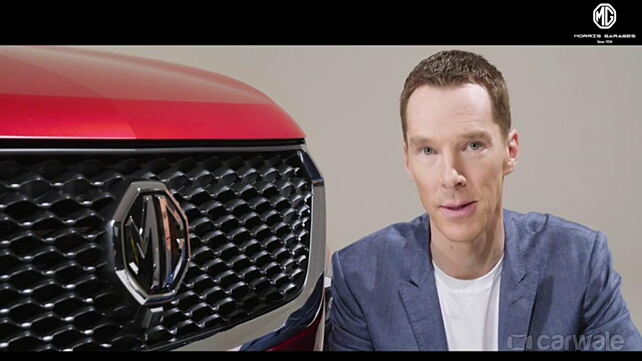 -The MG Hector will be the first car from the British carmaker in the country.

-The Hector will come with class-leading features and internet capabilities.

MG (Morris Garages) India has today announced British actor Benedict Cumberbatch as its brand ambassador for the Indian market. The announcement comes after the India-bound MG Hector premium mid-size SUV was spied while on a TVC shoot, being driven by the British actor.

Commenting on his association with MG, Mr Benedict Cumberbatch said, “I have grown up seeing and reading about MGB’s and MG Midgets, recognising MG as a classic and iconic brand. I am delighted to be part of the launch of the new MG in India with the MG Hector, which may well be a classic of the future.”

The British carmaker will begin its Indian journey with the MG Hector, which is based on the Baojun 530. The premium mid-size SUV has been modified to adapt to the Indian conditions. MG Motor India has already commenced its manufacturing operations at its factory in Halol, Gujarat. The MG Hector will be the first connected SUV in India and will come with internet capabilities.

The MG Hector will be loaded with features to the gills to differentiate itself from its competitors. Some of the class-leading features will include a 10-inch touch-screen infotainment system and a panoramic sunroof. MG Motor India will reveal the advanced technology features and the internet capabilities of the Hector in India on 2 April. Powering the Hector will be a Fiat-sourced 2.0-litre Multijet diesel engine and a 1.5-litre turbocharged petrol motor. Both the engines will use a six-speed manual transmission. The petrol motor, however, is likely to be offered with a six-speed DCT as well.